It's better to know and not need it, then need it and not know!

Tai Shin Doh is a martial arts style known around the world for its quick and easy self-defense techniques that anyone can perform. It is a true mixed martial art from well before that term was coined. At its' core, it combines elements of Shotokan Karate, T'ang Soo Do, Judo, Ju-Jitsu, Aikido, and modern Armed Forces Self-Defense. It is a style that is constantly evolving and improving. 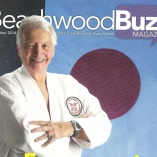 Tai Shin Doh was founded right here in Cleveland, Ohio by Soke Ronald F. Balas in 1967. It grew out of his armed service, and martial arts training he received in both Korea and Japan, during the Korean War, and upon returning back to the states. In the late summer of 1952, Soke Balas continued to train in JiuJitsu and Combat Self Defense while having been assigned to military bases at Ft. Knox Kentucky and Camp Gordon, Georgia, (now Ft. Gordon). During his undergraduate school days' Soke Balas became part of an informal Sport Karate Club at the old Fenn College (1955/59) which in 1963 became known as Cleveland State University.

During the 60's, he began teaching his own integrated, three dimensional approach to the martial arts, founded solidly upon full-contact Karate and "hard fought" JiuJitsu, but also integrating elements of Aikido, T'ang Soo Do, Judo and modern Armed Forces Self-Defense training. Then in 1967, the concepts of TAI, the head or intellect, SHIN, the heart and body, and DOH the "way" or "path" was suggested for consideration as the "new name" by a grateful and loyal Black Belt assistant Sensei Kingsley Guy. Thus was born Tai Shin Doh, officially inaugurated in 1967.

During the 1970's, Tai Shin Doh had the honor and privilege of being the official training method for many Law Enforcement personnel as well as elements of US Army Special Forces.(Res.) From there the style continued to grow and evolve to where it is today.

Soke Balas passed away in February, 2016. It is in his memory that we continue to teach and keep his style alive.

How to Find Us

Refer a non-family member new student and receive 20% off when they enroll. Just mention this special!

Get Connected With Us.

Recommend this page on: